★Golden Week Event is NOW ON!★ Play to Your Heart's Content During the Long Holiday in Japan! 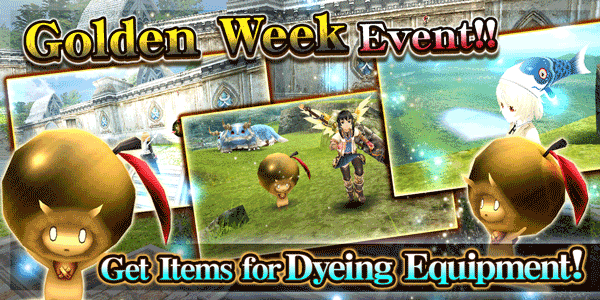 5 big campaigns that can be enjoyed during Golden Week will be held after the maintenance on 04/28/2021.

★1:The Golden Threat...Golden Challenges Are Back!

★2:If You Haven't Played Toram, Now's Your Chance to Get Cool Equipment!

The Golden Threat...Golden Challenges Are Back! "Golden Challenges" which are limited-quests that are perfect for the golden period are coming out!

You can challenge them from the wormhole in Government Office after collecting 10 "Golden Apple" from "Golden Coryn".


Challenge it with your friends and get the limited-edition items that are only dropped during the event period! Bring the body armor or additional gear obtained to the Synthesists and you will be able to dye your favorite equipment!


If You Haven't Played Toram, Now's Your Chance to Get Cool Equipment! During the campaign period, limited-edition items, namely, "Golden Katana", "Golden Greatsword", "Golden Lance" and "Golden Fake Greatsword" will be given as presents to everyone that downloads Toram Online and create their characters for the first time.

"Golden Katana", "Golden Greatsword" and "Golden Lance" can be used as weapons, while "Golden Fake Greatsword" can be equipped as additional gear.
Besides being useful for completing beginner quests, they look awesomely cool!

Those who have been playing Toram will be able to create the golden items above at the Blacksmiths.
Make sure to check them out!

During the campaign period, additional gears with motifs inspired by the Children's Day in Japan, namely, "Origami Kabuto" and "Carp Streamer Hat" are added to the recipe list!
Get the materials and create them!

Moreover, "Origami Kabuto" will increase EXP Gain and "Carp Streamer Hat" will increase Item Drop Rates by 10% when equipped during the event period!

Also, "Carp Streamer" will be added to the decoration list for Housing System, and you can place it in your garden!


How to Create Items with Limited-Edition Recipes?
Talk to the Blacksmith or Synthesist in "Sofya City", "El Scaro" or "Hora Diomedea", tap "Create Equipment" (for Blacksmith) and "Item Synthesis" (for Synthesist) and select "Limited-Time".

During the period below, special emblems to obtain handy items for your adventure will be available.

Make sure to play Toram Online every day and get various handy items!

Please note that the emblems are reset at 5:00 AM (JST/ GMT+9) every day, so please don't forget to claim and receive the rewards once you have cleared the condition.

During the period below, EXP Gain and Item Drop Rates will increase by 20%!

This is a golden chance to level up your character and get rare items!

*The bonus from this campaign is not applicable to pets.